House Progress: the Good, the Bad, and the Ugly

As promised, I’m back one more time to explain a little more of the crazy process of building an addition/remodeling most of the existing house!

There is so much I could say that it’s hard to pare down to a few highlights. A quick backstory on the timing of the addition: We found out we were (surprise!) pregnant with Ingrid right after Jonathan quit his social work job to begin counseling full-time. I experienced some major anxiety about how things would work out since we were already strapped for money and bursting at the seams in our two-bedroom home. Anyway, we looked into moving or adding a small master on the back of the house at that time, and found we literally had no options except to sit tight. Turns out you have to have 18 months of self-employment income before you can qualify for a loan. And a part-time nursing career amazingly isn’t enough to qualify either. 🙂 So we waited to do anything. And you know what? It was fine. For all the fretting, it worked alright. (Like most of the world and previous generations would tell you.)

Fast forward 18 months (remember that requirement?) and we had WAY more options than I would dare hope for in the Fall of 2014. This was primarily because home values had been skyrocketing in our area, so our little house had appreciated tons in the 5 years we’d owned it. Once we realized we had some options while adding even more value to our house, we decided we should try and tackle all the things that would make us want to move in the foreseeable future, as I mentioned in the previous post. So, it became a mammoth project. In short, God is good. And patience is a virtue. (Even if you’re being strong-armed into said virtue, I guess!)

So, in May of 2016 we packed boxed and moved half of our house into the other half of our house. I cannot believe this, but I have no pictures of what our living room and (old) master bedroom looked like lined with furniture and piled high with boxes. It was tight. We moved out for about 7 weeks, staying a good portion of that time 10 minutes away at Jonathan’s parents’ (Thank you, Dave and Becky!!), which afforded us the ability to check in at the house at least daily.

You see, we subcontracted this mess out, making it all the more crucial to live/not live at our house while we were gone. We decided to subcontract it out because we needed to make the biggest bang for our buck (as you know by now, we were trying to do A LOT–with a little, comparatively). A quick word on that, for those considering something like this: First, we didn’t know how insanely hard it would be to subcontract. None, really. And I really don’t think our expectations were very high. But still. Turns out you can put a price on sanity–it’s called a contractor. Secondly, we had my dad at our side. A retired civil engineer with all kinds of commercial construction experience and connections, we COULD NOT HAVE DONE THIS PROJECT WITHOUT HIM. He may have the been the wind in our sails that convinced us we could do such a crazy endeavor ;), but he was also so committed to helping us succeed that he spent countless hours showing up at our house, making calls on our behalf, doing the heavy lifting when things fell through (which they inevitably do!), and giving a compassionate ear when we cried about how hard it was. It was funny to look through pictures, because there were a million of him walking through the frame, just being there at every turn. My dad deserves a medal. We are eternally grateful! 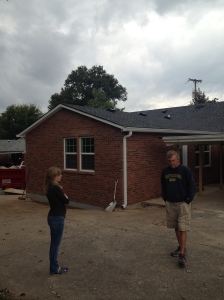 The last picture is of Jonathan and my dad using a hammer drill under the crawl space to create an opening between the existing crawl space and the new one. In case you were wondering 😉

Okay, so back to the process. One of the best/worst parts was the kitchen. We designed an Ikea kitchen with a local company called ModerNash. We put so much time and energy into planning the thing, then they went and got everything for us, and we were ready to go. Except our assembly guys flaked. We were highly motivated to keep the project moving forward and the next guys who could get it done were like 3 weeks later. So, in a moment of complete insanity, we decided to assemble and install the cabinets ourselves. My mother-in-law came with us late one night (while my FIL stayed with the kids) to help us get our heads around Ikea assembly, and we began to chip away at it. It took weeks. So many late nights, heading there after work and kids were in bed. We didn’t have lights wired yet, so we strategically plugged lamps around the space. 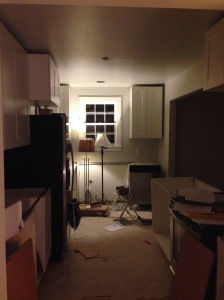 Ikea is wonderful. But if you know anything about them, you know nothing comes assembled. We received about 90 boxes for our kitchen. This picture is at the halfway point or so, but you can see some of our method for organization as we assembled:

Then, came the counters, which were acacia butcher block we bought from SouthEastern Salvage. This is after installation and before we oiled them the first time. Look at the pride in my eyes. And fatigue.

I have all kinds of thoughts about wood counters, but the long and short of it is we love them. Reach out if you have questions!

The kitchen was seriously too much on top of work and kids. It was crazy. I was genuinely worried I would lose my mind, but we did it! (And saved some much needed dollars, so…) As I said, we were motivated to keep the project moving because our life is a bit nuts without all this, so we needed to get back to “normal” ASAP. From start to finish (passing final codes inspection, anyway) we did this thing in 6 months.

Our kids were champs. We arguably had them in so many questionable situations. But, no trips to the ER! They became pretty accustomed to dangerous things around at any given point and didn’t bother things.

After 7 weeks out, we moved back into the house (definitely before most people would think it was a good idea). We had no microwave, hot water heater, stove, running water in the kitchen. But a good bit of that was in shape within a few days! Liam was starting kindergarten in the middle of everything, and it was so important to me that he be back in the house for his security and adjustment. He did a lot better than I did.

Jonathan and I moved our mattress into the living room (around all the boxes) and slept there for the 3 months following. We joked we had a studio apartment whenever people would walk in the front door. This is the only picture I have, really, that proves we were there. You can see our built-ins in the reflection of the mirror.

And here is the kids’ new temporary set up after we moved back in (before the carpet was installed in Liam’s new room). 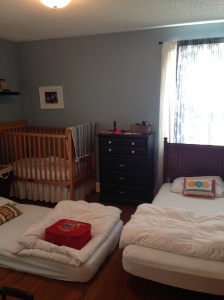 To make matters more fun, the entire family got head lice (first timers!) within the first few weeks of Liam starting school. People, we did not have a washer hooked up (for months, but this timing was painful)! That kind of stress makes you cry and laugh, cry and laugh. 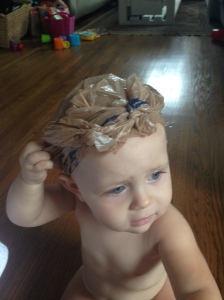 We went back and forth about the material for the exterior of the addition and finally landed on brick. It’s not an exact match, but it’s not too bad. Several people have asked how we found matching brick. Yeah! And it doesn’t hurt that it’s in the back of the house.

This is a gigantic post, but one more strange thing we learned: natural materials are some of the hardest to get rid of. We probably rented five 10 cubic yard dumpsters for everything, but we we got down to sand, gravel, dirt, rocks–we couldn’t get rid of it! Nobody accepts/wants that stuff! Explain that one to me! That meant we had a hobbit hill in our back yard for a l-o-n-g time.

In all, we probably had at least a dozen people from craigslist and such take dirt. I am sure that dirt multiplied. We offered a contractor doing work down the street with a bob cat free top soil and he wanted $500 to take it. What?! So, we kept offering it to people with pickups and shovels. The following spring, it was smaller, but still there, just staring me down. I hated that dirt pile.

I am happy to report that by this summer, we had a (somewhat) level back yard! Things are looking pretty normal here these days. Even though we still have caulking and painting trim to be done here and there. Homeownership is a work in progress, though, am I right?

Phew, I’m tired again just writing about it! We may very well have lost a few years off our lives, but we are so grateful to have the opportunity to make our house so much more of what we wanted and needed. It takes a village, and we certainly have a good one. We love this house. Our blood, sweat, and tears are in this place!